Authorities say that thriving bear populations in Pennsylvania and West Virginia continue to push young male bears to Ohio in search of their own territories. Although most bear sightings have been in eastern Ohio they have been spotted as far west as Dayton and as far south as Cincinnati. Young male black bears venture around the Buckeye State looking for love. Because of unregulated hunting and habitat loss black bears were rendered extirpated from Ohio by 1850. Although small, Ohio once again has resident black bears. The resident black bear population is currently estimated to be 50-100 bears. There have been 21 Black Bears reported dead in Ohio since 2014 and only 2 have been female. 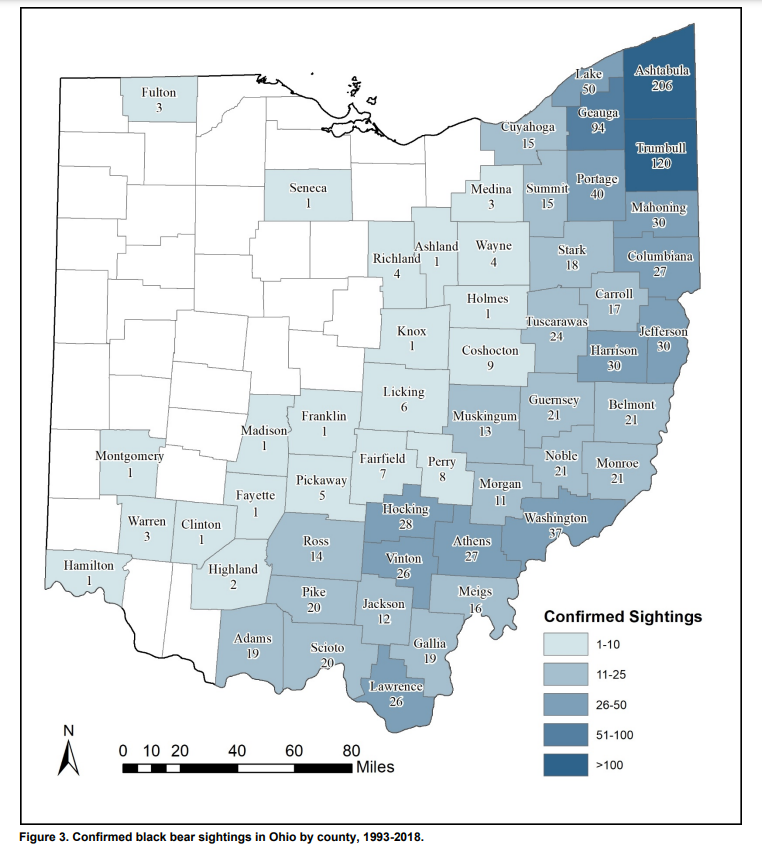 Bear Biology and Habits
If we are going to coexist with black bears it is important that we understand their biology and habits. Ohio’s black bears range in size from 100 to 400 pounds with the possibility of reaching up to 700lbs. Black bears are usually 5 to 6 feet in length and average 36” high at the shoulder. Most all black bears in Ohio weigh between 125-250 pounds and are juvenile male bears. Young male black bears will travel great distances in search of new habitat and are the most likely interact with humans. Black bears can run up to 35 mph, climb trees and swim long distances. Bears are omnivores, they will eat a wide variety of foods. Their diet may include grasses, forbs, berries, mast from oak, hickory, and beech trees, carrion, and insect larvae. Bears will also consume agricultural crops and can cause considerable crop damage. It is also important to note that even though they are called Black Bears their color can vary from black to blonde and reddish. Black bears will travel 5-10 miles per night in search of food. Adult males have a home range of 100-120 square miles while females average between 25-50 square miles.

2022 Bear Sightings
This year there have been numerous confirmed bear sightings from all over Ohio with the majority in eastern Ohio. Several Police Departments in Medina and Summit counties recently posted on Facebook warning residents of multiple bear sightings. Norton, Hudson, Wadsworth, and Montrose were among the cities with sightings. WKYC NEWS In addition posts and videos have appeared on social media showing bear sightings in Nelsonville, Columbus, Heath as well as many other cities in Ohio.

If You Encounter a Black Bear
Black bears are almost always fearful of humans, therefore bear attacks are rare. Bears will not attack or kill children or pets if the bear is given its space and not cornered. The most important thing to remember when you see a black bear is REMAIN CALM. Generally, black bears are non-aggressive and will flee from the area as soon as they are aware of your presence. If you were to encounter a bear, and it is not aware of your presence, simply back away from the area slowly. If the bear has seen you and it does not leave, do not have direct eye contact with the animal, give the bear an easy escape route and simply back slowly away from the area. Never run or climb trees, which may provoke a chase. In a calm firm voice tell the bear you are near. Step away slowly keeping space between yourself and the bear. If the bear approaches raise your hands in the air to appear larger and clap your hands and shout. ODNR Ohio Black Bear Monitoring Report


Future
As the black bear population becomes more established there will be even more sightings and human/bear interaction. We may even one day see the population grow to where the ODNR will establish a legal hunting season. In the meantime keep your camera ready and enjoy the beauty!