The Air Gun That Helped Win the West

The Girardoni .46-caliber air rifle dates back to 1580. These guns were used by the wealthy and upper-class citizens to hunt deer and wild hogs in Sweden. In 1780 a gunsmith named Bartolomeo Girardoni stepped in and created a new model that was used and adopted by the Austrian military.


The rifle weighed 10 lbs. and was 4 feet in length. Each rifle came with three iron flasks that could be attached and detached and were pumped full of compressed air. The rifle was then loaded with 22 lead rifle balls that were shot individually using bursts of compressed air. The bullets were fed into a tube along the side of the barrel. The bullets were loaded by gravity much like a modern BB gun. A steel block which slid forwards and backwards at the breech controlled the lead balls and only allowed one to be loaded at a time. 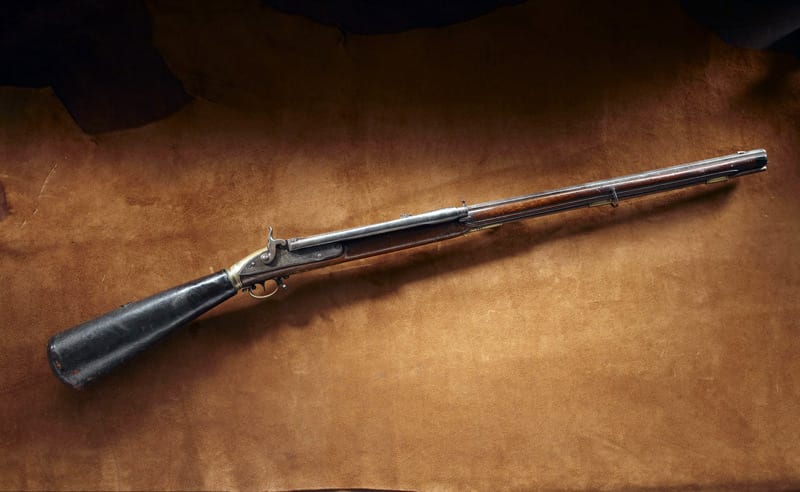 This rifle was years ahead in firearms technology. Muzzle velocity was 1,000 FPS and the magazine of 22 lead balls could be shot in less than 30 seconds. The rifle had enough power to drive a bullet through a one-inch pine board at 100 yards. The rifle had many advantages to firearms driven by gunpowder. There was not the usual big cloud of black smoke, rain did not hinder the rifle since there was no powder to get wet. In addition, it was quiet when discharged not giving away the shooters position.

After Austria used the rifles in the Austro-Turkish war from 1787-1791 Austria decided to retire the rifles due to the weapon’s complexity. Production was completely phased out by 1810. No one is quite sure how the rifles made their way to the United States but on or about June 9, 1803 Captain Meriwether Lewis purchased one from Lukens instrument shop outside of Philadelphia.

When Lewis and Clark went on their great expedition, they used the firearm on many occasions to impress and intimidate new Indian tribes. Lewis and Clarke would march boldly into their meetings handing out gifts and medallions and always managed to work in a demonstration of the rifle.
Lewis who kept a personal journal demonstrated the rifles capabilities and noted that the Indians considered the rifle “Something from the gods”. There were at least 39 entries in the expedition’s journals regarding meetings such as these. Lewis and Clark and their team of 38 boldly marched through village after village of the most hostile people on planet earth without as much as one casualty.

The fact that there was not a single casualty speaks volumes to either the respect or fear the Girardoni drove into the hearts of the people that Lewis and Clark met on their expedition. Now, when you think of how the west was won you can add The Girardoni Air Guns to the list of firearms such as the Hawken Buffalo guns, Colt Peacemakers and Spencer Repeating Rifles.